My three-week trip to Abu Dhabi and Dubai, UAE 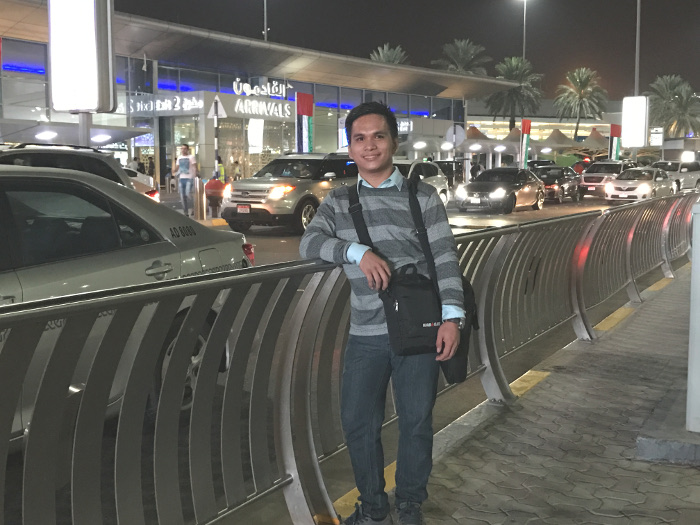 It all started with a dream. I know it sounds cheesy! But to travel outside the country is something that I have always dreamed of. Financial constraints and strict visa policies were the Gandalf that says “You shall not pass!” (Is my reference right?). But when the opportunity to travel to UAE knocked on me, I didn’t hesitate, and started saving money.

The first time I was supposed to travel was way back in October 2015. As part of the deal, my Aunty Mirasol and her husband Uncle Erwin gifted me a trip to London, England after my graduation and board exam, should I pass. Things didn’t go the way it was planned. For starters, I wasn’t able to take the 2015 Interior Design board examination because I wasn’t able to register within the given period, which for me was a blessing in disguise because I wasn’t really prepared to take the exam. I was working Mondays to Fridays and had to excuse every Saturday from work just to attend the review. Second, my visa application got rejected! Thanks UK Embassy. I felt bad because my aunt and uncle came to the Philippines from Abu Dhabi just to assist me at the visa center since they were my sponsors. It was heartbreaking to read the refusal letter, let alone seeing it, from the Embassy, my dream of going to London went down the drain of broken dreams and hopes. #Hugot

Let’s not cling unto the past and skip to my first ever International Trip.

Applying for UAE visa was not as complicated and strict than that of the UK or US. You have two ways to apply as far as I know. First, through the hotel you’re staying. The hotel will be the one to apply for your visa as sponsor of your trip and the second one is thru an agency. This is what we opted. The agency I applied was Regal Tours Worldwide, they will be asking for your passport copy, number and guarantor form signed by your guarantor. In my case, my guarantor was my uncle (same uncle), and also you have different options to pay, I opted for money transfer since banking transaction would mean that I have to enroll their account, at least that’s what I thought. After paying you’ll wait for 2 days, 3 days tops. But for the case of Philippines, the UAE immigration will be asking the original pink visa upon arriving at the airport. The agency will send you the pink visa with additional fee, together with the departure letter and trade license, these are important documents especially for first time travelers like me that you’ll have to show at the immigration gates at NAIA before boarding. Trust me when I say this, the Immigration officers at NAIA are stricter than the Immigration officers in Abu Dhabi, like literally.

Once I had my visa, I can’t contain my excitement! You have no idea the troubles I had to go through when I arrived at NAIA. Unfortunately for me, Etihad Airways don’t serve CEB – ADH as of now. Yes yes, there is Emirates Airways in Cebu but I can’t choose it for a reason. Anyways, traveling with Etihad was great, the service was impeccable, the options for entertainment were limited but entertaining and the foods were not bad though I actually enjoyed it, and I know I’ve been blabbing for about four paragraphs now so let’s cut to the chase!

I departed from NAIA, the evening of November 20, 2016 and arrived at Abu Dhabi International Airport evening of November 20, weird right? Most of the passengers were OFWs en route to KSA and transit passengers. Honest to God, I was just so lucky to be seated with a person who was good enough to share his selfie with me (hahahaha), his name was Richard and he’s heading to KSA together with other 30 recruited Filipinos to work in Kingdom of Saudi Arabia, and the middle seat was vacant so we were not crammed. To Richard, if you’re reading this, thank you for those interesting conversations, it made my trip less boring and tiring, especially sitting for more than 8 hours at 33,000 feet. Upon arrival, I was at awe at the grandeur of their airport. It was will lit (not the BuzzFeed lit like Lit AF or woke or whatever that language), even the runways and the taxi way. Getting thru the immigration gates was a breezy. Remember what I said that the officers at NAIA were more strict, well at their immigration counter, you’ll only have to present the pink visa and your passport, then stand in front of the eye scanner, yes an eye scanner, not that cheap desktop cameras at our airport; for your entry and that’s it. No questions whatsoever, no hassle and no stress. Trust me, it’s more stressful in NAIA than there.

Walking through the hallways felt surreal for me, I never thought I would be able to land on a foreign country. I was about to cry but I didn’t, I mean seriously who likes drama? After exiting from the last gate, my aunt and uncle welcomed me and a Ferrari car being displayed at the airport waiting area, you don’t normally see that in our country but believe me, the longer you stay there, the more it will be a common sight for you.

Driving through the streets of Abu Dhabi, I noticed how clean the streets and how disciplined and organized the traffic, thinking “I wish Philippines would be as progressive as here”. I also noticed how fast people drive, I mean when my uncle started driving it was 80 kilometers per f***ing hour and that’s just normal to them! I was holding on for dear life. But I can’t deny how great their landscapes, the streets have more plants and trees than our streets. It’s wide and speed limits are monitored by a Radar, no traffic enforcers, just Radar. How amazing it is!! Forgive my ignorance, this was my first trip.

For my first week there, my uncle filed a one-week leave from work to tour me around Abu Dhabi and Dubai with my aunt. On the first day, we planned to go Corniche, Marina Mall Abu Dhabi and the Emirates Palace and one of those we weren’t able to visit.

We first went to The Corniche aka Corniche Road. It is like a promenade were there were some parks, beaches,restaurants and public parking where you validate or pay your parking ticket through a ticketing machine, isn’t it convenient and efficient? What I like about Corniche is you have a great view of the ocean and Abu Dhabi’s skyline.

During my visit, UAE was celebrating their National Union Day on December 2, 2016 so everywhere you go you could see the flag of UAE, from the lamp posts to the buildings, even the under construction buildings. They even went beyond decorating their cars in celebration of their National Union Day. That’s just how patriotic the people there even the expats, it’s amazing.

The next place we went to see was the Emirates Palace. I was so excited to even set foot but unfortunately we weren’t allowed to enter, because why you ask? We were wearing shorts! Those bloody shorts, although I look good on those shorts. Even though we were not able to enter, but the sight was magnificent that I forgot to take a picture because I just marvel with its architecture. Oh by the way I forgot to mention, I love architecture and being able to visit Abu Dhabi and Dubai was like a pilgrimage for me.

Since our plan didn’t push through, we headed to Marina Mall, until now I still couldn’t get over how organized the traffic there. People were following the traffic rules and they would stop when pedestrians were to cross the street, even if it’s a Ferrari or a Lamborghini, contrary to ours that drivers treat the pedestrians like bowling pins in a bowling alley.

The first thing we did was enjoying a ride at the Marina Eye, it’s sort of like the London Eye but smaller. The line was so short that it was just the three of us lining. Luckily enough the persons-in-charged were Filipinos and from the usual 3 trips, they made it 5 and you know that feeling you have when you wanted to pee so badly that you thought of jumping off and let go of the freaking pee!

The view from the cab was amazing. You can’t deny the beauty of the place.

After a long day of driving and walking and driving and walking again, you got to fill up your tummy with something delicious, and that’s exactly what we did. Remember the tower in the middle of the Marina Mall, the top of it was the Tiara Revolving Restaurant, it is a revolving restaurant, and yes you read it right, I was skeptic too when I heard of it. The ride from the elevator going to the top was amazing because you can see the skyline since it is in glass enclosure, although my aunt wasn’t feeling it. She felt nausea and I was enjoying it like a little kid, I mean I haven’t had an experience inside an elevator where you can see the city from the inside. As soon as we got there, I was like “where’s the revolving restaurant?”, and you see the dining area where the tables and chairs were set, it moves, I did not see that coming. It moves so smooth that you wouldn’t notice it’s LITERALLY REVOLVING! You have a 360 view of the Abu Dhabi.

The foods were great, the staff? You guessed it, Filipinos! Well not all but most of them were Filipinos. It’s really great seeing fellow Filipinos and knowing they’re working abroad to support their family. I can relate to them because my father is an OFW and he has been working in Qatar for over 4 years now, although he has been working abroad since I was in 5th grade in Indonesia. I have the greatest respect to all OFWs because I know how it feels to be away from your loved ones.

Honestly I couldn’t remember the names of the foods we ordered, the only one I remember because I requested it, was the Tiramisu. While dinning there, you wouldn’t notice the floor moving since it’s basically a slow movement to allow the guests to have a better viewing experience of the city, but seriously, it was revolving! And no, you won’t feel dizzy at all, you wouldn’t even notice that the view outside changed. 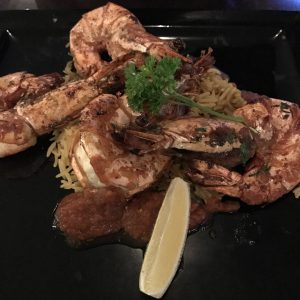 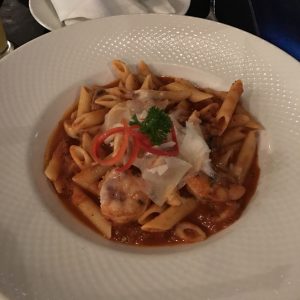 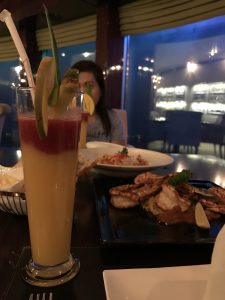 And here we were, enjoying the last trip of the day. I’ll be posting about my trip in parts since I stayed in Abu Dhabi for three weeks, so you’ll see more of the sights and tourist attractions in both Abu Dhabi and Dubai. So stay tuned for the next installment of My Three-Week Trip to Abu Dhabi and Dubai, UAE. I hope you enjoyed my first post and I would like to hear from you guys.