My three-week trip to Abu Dhabi and Dubai, UAE Part 02 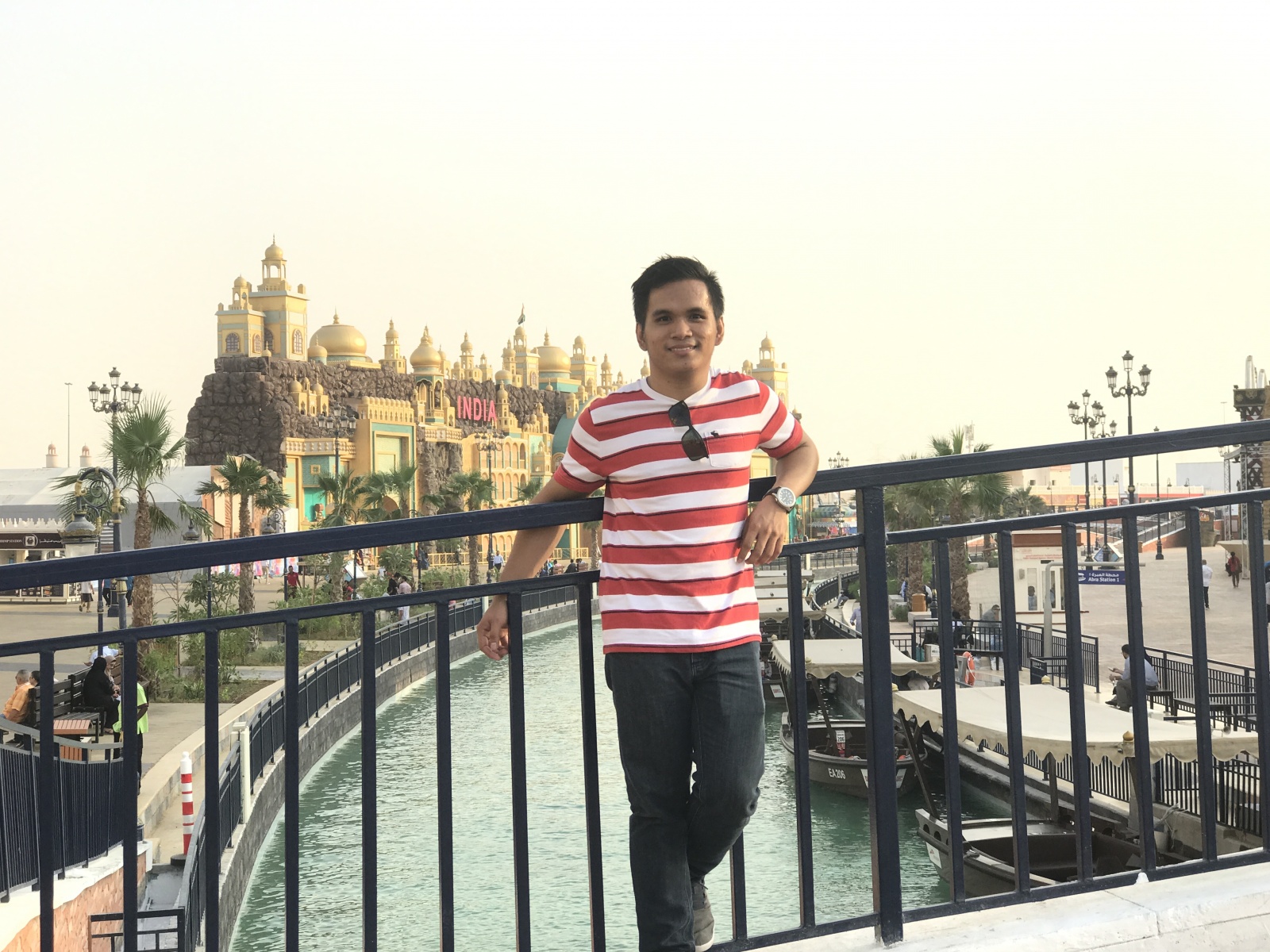 Okay, so where were we? Ahhh! Day two of my trip. So basically by this time, my body has not yet adjusted with the time difference, Philippines is 4 hours ahead of UAE, so if you’re planning to visit UAE, schedule your flight that will coincide with your body clock. Anywho, we didn’t really have itinerary for my trip and we planned our journey as we go along. This time around, my aunt and uncle took me to Dubai. I was excited even just hearing “Dubai”. Traveling there from Abu Dhabi means that you have to wake up early, but not too early since it will only take you one-and-a half or two-hour drive. So basically if you’re living in Cebu, the distance is like from Capitol to Medellin or Daan Bantayan. But the big difference is the speed and also their roads which I cannot emphasize how much impressed I am with their roads.

Driving to Dubai would mean driving at a maximum speed of 140 KMPH! And I kid you not, that’s how fast they drive, it’s like riding with Buckbeak or the Nimbus 2000 (where my Potterheads at?). My uncle said it used to be 160 kmph but due to some accidents, they lowered the maximum speed limit. Before I talk about Dubai, what I like about their roads is that, it has four lanes in each way with an island or barrier to separate the two ways and prevent premature U-turn or left turn, which is a good thing as it will not disrupt the traffic. They also have dedicated left turn lane and exit lanes.

For the right most lane, it is the slow lane with a minimum speed limit of 60kmp, the second lane is the moderate with 80kmp, the third lane is the fast lane with 100kmp and the last lane is the fastest or emergency lane with 120kmp, to achieve the maximum speed limit of each lane, just add 20kmph. But watch out for the Radars because the moment you passed the maximum speed even with 1kmph, you get flashed and be ready to pay a hefty fine and point demerit to your license. You pay online and check the status of your driver’s license, yes it’s online unlike in our country that you have to go to LTO and the line is so f***ing long with a sign “No Lunch Break ” but there’s nobody assisting. Why can’t we have this kind of system, it is much efficient and will also discipline the drivers.

So enough with my rant about our system which by the way I will have more as my post goes on. Driving to Dubai is quite far so make sure to eat and tinkle before leaving, but don’t worry when you need to eat or go to the restroom since they have rest areas along the way which is basically the gasoline station and I love the setup of their gas station. It has complete services from tire changing, to oil changing to automated car wash and a mini mall, not mart, a mini mall with a small food court inside with a variety of famous foods you can choose, from Popeyes Chicken to Domino’s pizza to Burger King, from Baskin-Robbins to Costa and a lot more with a mini mart inside. It also has a Mosque outside where they pray during the call to prayer. It’s an all-in-one place. Driving past Abu Dhabi you will notice the difference with their streets cape, in the Abu Dhabi side, there are a lot of plants, tress and flowers even the island, the moment you enter Dubai, nada! But that doesn’t mean Dubai doesn’t have those beautiful landscapes, it’s only the part where you enter Dubai through the freeway, other than that, you’ll be surprised plants and flowers survive the scourging heat.

The moment you enter Dubai, you will see the under-development of the Dubai Parks and Resorts which will open soon, and if given the chance and the means to travel back to UAE, I will surely check it out. Now that we were in Dubai, the plan was to visit the famous Miracle Garden and to our dismay, the park was closed for renovation and will open for the next season. Why?!? Why?!? It’s one of the reasons why I wanted to visit Dubai and it’s closed! It turned out they’re just preparing for the reopening on November 27, 2016, so at least we’ve got something to look forward to. Since it’s closed we went to a different park, the Global Village.

The Global Village is a park in Dubai wherein they incorporate famous tourist attractions or icons from different countries around the world. It’s a fascinating park where you discover interesting sights and meet people from different walks of life. One of my dreams actually came true there, well sort of. Going there isn’t really easy, we got lost and had to turn back to get there which was funny because they have been there before, they just forgot the way. When you get to the park, you’ll see a massive parking lot where there is a section for premium passers. From the outside, the park has an amazing facade with Arabic style Architecture and Arabesque design. The ticketing area is located outside and the price of the ticket is 15 AED which is about Php 202.50 (Php 13.5 exchange rate).

At the entry gates, you are greeted warmly by the staffs mostly Emiratis proudly wearing their Thawb or Kandura. While lining, you can already see the inside with all its features from different parts of the world. What greets you upon entering are the Statue of Liberty, The Elizabeth Tower (Big Ben), The Burj Khalifa, et al.

Like what I said from the first part, one of my dreams came true while visiting the Global Village. Guys, I’ve made it to London! Well sort of, but it’s close enough.

Different countries in one place.

So I wont bore you with so much talking, just take a look with the photos I took with the obligatory selfie and groufie.

It’s all grand and interesting, all those countries have stores inside and if you think you can buy things or memorabilia pertaining or from that certain country, you’ll be disappointed to know that most products being sold there are from China or made in China. Although the foods are interesting because they come from different parts of the world. Tropical fruits from Malaysia and other parts of Southeast Asia. It has a massive ground and the area is not too crowded, well partly because the Emiratis start coming after the last call to prayer. There is also a stage where there are performances in between.

There are so many countries that they feature and since the park is quite big, you’ll have to walk and walk and walk. It’s a bit tiring though but your eyes will enjoy from the sights.

There is a lot to see there that putting them in one post would mean a really long post. It’s great looking at them through these photos, but it’s more interesting if you are there. If you will have a chance to travel to Dubai, don’t miss Global Village. You will have at least a chance to visit every country in one place.

After the long day and our visit at the park, we went to see the world’s famous Burj Al Arab at Jumeirah. Although we weren’t able to get in since it’s pretty expensive, but we just took a look from the open beach at Jumeirah. I love how they keep their open beach clean and secured. There is a rubberized pavement for those who love to run or jog. There are restrooms and restaurants. It’s interesting to see a working government that implements its system to the fullest serving the people and not only the few. Yes, the cost of living is high, but you can see why, from their infrastructures, roads and even bridges. No doubt what those oil money can do, maybe that’s why some countries wanted to take Scarborough because of its natural gas.

We also went to the famous Souk Madinat Jumeirah. It’s a bazaar with a water canal where you can take a ride with the water taxi. We weren’t able to experience it though since there were no water taxis serving. It is a bazaar that showcases the very best of Middle Eastern style with stalls and restaurants in wooden covered arcade.

After a long day touring, we had our dinner at The Mall of Emirates. We ate at their food court and it’s no short of food choices, from Japanese to Chinese to English and there is even Jollibee; YAY Pinoys! We didn’t really have a chance to tour the inside since it has been a long day, but the bonus part is I saw the Ski Dubai. It’s an indoor ski in the mall where you can ski, snowslide and there is also a penguin show at a certain time.

This has been a long post and I hope you enjoyed this another installment of my trip. You’ll be seeing more of Abu Dhabi and Dubai in the next few posts. Spoiler alert, it involves the world’s tallest building Burj Khalifa and the world’s famous Ferrari World. I hope you had a great time reading and I would like to hear it from you. Thank you!

You can check the first part here:

My three-week trip to Abu Dhabi and Dubai, UAE